I learned about the wonderful Rashian muzic only a few months ago. Before that I was a fan of Western music. I liked some Indian music but Western stuff definitely sounded better. After Western music companies amalgamated and started wallowing in monoculture, I rediscovered Indian music. Now, I am a fan of traditional Indian music.

In the late 80s, a 3-in-1 became our prized possessions. It was a 3-piece music system. It had a 4-band radio including FM (with stereo), 5-band graphic equalizer and a tape player/recorder. It could record from radio and microphone (and mistakenly ruin some good pre-existing recording). It was wonderful. For the first time, I paid attention to the lyrics beyond the first stanza and found that most popular Tamil movie romantic songs were actually dirty songs. We also had to cassettes. One had the best Hindi film music from the 70s and 80s and the other one was titled “Disco 88”. The inlay card was handwritten and much of it is illegible. Here is what I could salvage:

My favorite is Needles and Pins. Several people have tried to sing this song but Charleene’s (whoever she is) is the best. The other great is Don’t Stop. All of these songs are imprinted in my mind as I have heard them a million times. At that time, there was no FM. If you did not want local stations on MW, you could listen to SW. Sri Lanka broadcast the latest Tamil and Malayalam songs and was a favorite. Australia Broadcasting Corporation had the best sound, even better than Voice of America (VOA). The Americans had a transmitter in Triconamalee in Sri Lanka but their broadcast reception was … what’s the four-letter word to describe it? It was clear that the Americans were interested in a different kind of radio and the Indian military had good reason to be angry with them.

One day, the FM band crackled with some music. All India Radio began test broadcasts of one-hour programs and then all-day transmissions. It was bliss. Hours and hours of good Indian and Western music. Even the Indian music was good because of the FM-quality sound. The only type of music I did not like was rock music. They had no tune and the lyrics were unintelligible. Prior to this, my only other exposure to Western music was Madonna and her album True Blue. For a long time, Madonna was the most beautiful woman in the world for me. (This changed to Jessica Lange and many others after movies of Touchstone Pictures began playing late at night on DoorDarshan.) DoorDarshan had some relationship with a German TV company by the name “Transtel”. Thanks to TransTel, I saw a lot of disco pop in a program called EuroPop.

The good times on the FM band lasted a few years. AIR was asked to lease its air time on the FM band to private producers and this brought in good and bad. There was one MTV VJ (Nikhil Chinapaa) who appeared on Chennai FM before he went to MTV. The pretty heroine from the Kamal movie Guna was a DJ on AIR before she became an actress. (She was not very good as a DJ.)

In the 90s, MTV made its appearance first on DoorDarshan and then as an independent channel. I saw a lot of music videos. My hairstyle was Keanu Reeves but my moustache was George Michael. I knew more about American pop artists more than I did about Indian artists, pop or classical. So, here is my playlist.

‘2020 Fresh Clean Jokes For Everyone’ book

The biggest or second-biggest book of original jokes has been published). Read jokes from the book in the published excerpts from a sample PDF. 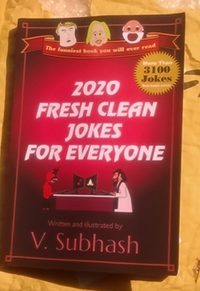 Learn To Ride A Motorcycle In Five Minutes