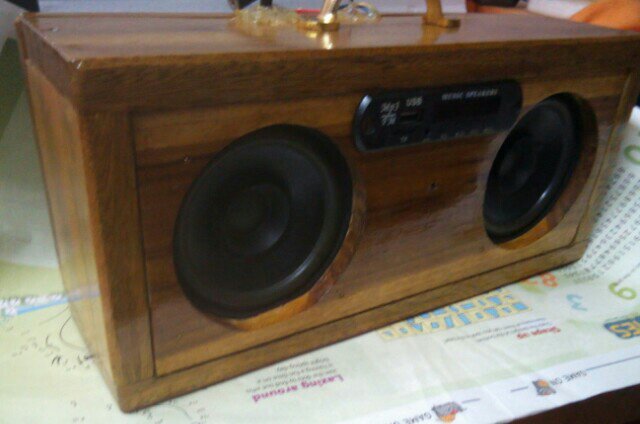 After painting my 2.1 subwoofer amplifier music system, I decided to paint the older boombox. I had created my 5-volt tablet-battery-powered dual-LM386 boombox stereo speaker system last year but it has remained unpainted. Recently, I fixed a long-standing problem with the speaker selector switch and added a LED sound level indicator. I decided the build could now be considered stable. It was time to paint.

As it was made of real wood (not plywood or particle board), I decided to apply a layer of shellac, rather than paint. This would highlight the natural contours on the wood and not be obscured by paint. Other options for shellac were polyurethane, wax+linseed oil combo, and lacquer. When I was a kid, I had seen a carpenter applying shellac on a door and so I knew how to do it. I decided to go with shellac this time.

Before applying the shellac, I had to choose a stain (color layer). The first store had red-brown, teak, charcoal and walnut. I assumed teak and charcoal were dark. I had no idea what walnut was. They had had no color swatch on paper for me to select the color from. The bottle had no color label either. I wanted it to look like the stock of an AK-47 but did not know how to describe or identify it with a name. At the second shop, they had yellow.

I sanded the wood with 120 silicon carbide paper. I have more nicer paper but I did not use those. I applied the yellow stain all over the wooden box and rubbed the excess off with a cloth. The red stain, which I tested on the bottom was too dark and I did not use it. I could have diluted it but did not know how. After five minutes, I applied a coat of shellac (Sheenlac) with a brush. I then waited ten minutes and applied another coat. There were some areas where the shellac was uneven. I ran them over the next day. Under some angles of light, my shoddy workmanship is visible but from a distance nobody is wiser.